Stakeholder meeting for the EU4Environment RECP project has been launched on 28 June in Yerevan, to discuss support to SMEs in their transition to circular economy practices and benefits of resource efficiency in different industries, including fish, food producers, plastic and metal, chemical producers, construction materials, paper production and other relevant industry branches.

The meeting was opened by the host Ministry of Environment of Armenia, Deputy Minister Ms. Gayane Gabrielyan, who mentioned the green economic agenda is not anymore, the task of one agency, but living agenda for the government of Armenia, which will work on its implementation multilaterally, both at intra and inter-governmental levels. She has also mentioned the Green platform which was launched by the Government in support promotion of a green agenda and economic development in all relevant sectors of governance. Ms. Gabrielyan has underscored the fact that the EU is implementing an important agenda that unites economic development and environmental protection, which supports all spheres of governance, be it infrastructures, technology, investments, banking sector.

Ms. Gabrielyan has thanked UNIDO for supporting an important inter-governmental cooperation dialogue on the green economy. The country has undertaken efforts to mitigate and adapt to climate risks and climate change impact and promote sustainable development goals and this dialogue is of utmost importance for the success of the effort.

Ministry of Economy has been represented by Ms. Diana Muradyan, who has mentioned the importance of practical implementation of the circular economy using RECP practices and assistance to SMEs. Promotion of Circular Economy strategy and practices are one of the most important priorities for Armenia since the very notion of greening the economy avails new opportunities for the development of more sustainable solutions for small and medium business companies operating in a more environmentally friendly way.  Green economic development is one of the most effective options to promote economic development in line with innovative approaches, energy, water and material savings, and avails opportunities to use resource and energy efficient methods and practices to help the private sector in reducing their operational costs and meanwhile, improving their environmental performance. One of the most practical approaches to mainstream Circular economy is the practice is the methodology of Resource efficiency and cleaner production (RECP), which has been successfully tested in Armenia.

Mr. Andrea Baggioli, EU delegation in Armenia, has greeted the Ministries of Environment and Economy, mentioning this was the first event on RECP which is face to face after COVID19 pandemics. Mr. Baggioli has mentioned that the project is part of EU visibility action, and next time the EU banner should be provided during the event. Mr. Baggioli has mentioned that the EU is supporting the Green Deal implementation and within it, the climate action, working with RA Government on green interventions, management of the environment, and circular economy action. EU supports the creation of jobs, and collaboration efforts within EU4Envirnment together with partner agencies of UNIDO, OECD, WB, and UNECE.

Within Environment and Climate portfolio, the EU supports efforts targeted at the reduction of GHG emissions, through DG NEAR, for the recent 2 years, the EU is supporting the RECP action in support to SMEs. This is an important initiative. In the future EU is planning activities related to climate interventions, around 3.6 mln Euros in the regions of Armenia like Shirak, and Syunik, supporting the use of renewable energy sources application, supporting rural development. EU will also support the involvement of rural women in development projects.

Today the present meeting is called to discuss progress on resource efficiency and cleaner production performed within EU4Environment, it is a good opportunity to showcase the best cases, demonstrations, and events to discuss the risks and challenges, as well as appropriate solutions provided by RECP. And finally, Mr. Baggioli stressed the importance of the meeting, conveying the greetings from the H.E. Ambassador of EU Armenia Ms. Andrea Wictorin.

Ms. Tatiana Chernyavskaya, Project Manager from UNIDO, greeted the participants and thanked all the stakeholders and government for joining the meeting.
UNIDO has employed the Resource efficiency and CP methodology to support SMEs and promote environmentally friendly industrial development, pushing the process of sustainable industrial development to the agenda. Thus, RECP should be seen as a support mechanism for the promotion of green business agenda. For more than 30 years UNIDO is promoting collaboration on the topic. Outlining drivers and solutions for RECP, among which Armenia’s experience will also be discussed today.

Ms. Anahit Simonyan, UNIDO Representative to Armenia, outlined the importance of an inclusive approach to new stakeholders present to the stakeholder meeting, as a good opportunity to promote dialogue and collaboration between different sectors, such as government, CSOs, SMEs, academia, think tanks and private sector which are leading the development of the green sector in Armenia. This is also important within the UNIDO Country Programme context signed by the Government and the importance of the Green Platform launched by the Government recently. She thanked the EU for supporting the important intervention of EU4Environment targeting RECP promotion in the private sector.

After the introductions Ms. Nune Harutyunyan, the National Project Coordinator of the RECP component of EU4Environment action, presented the project progress, introducing the results of the project implementation, including the RECP institutionalization, results of EaP Green SME monitoring, new RECP assessments in different industry sectors, the expert network, the coaching programme elaborated to train experts and SMEs on RECP methodology. She has also mentioned the RECP audits performed in different industries, including food production, fish producers, plastic, metal, and textile goods, mentioning that an individual approach is taken to satisfy each producer company’s needs through RECP. Ms. Harutyunyan has outlined the results of SMEs involved in the RECP monitoring campaign within EaP GREEN, working closely with Armenian industries to develop business cases that demonstrated the benefits of adopting RECP measures in the short, medium, and long term.

Ms. Harutyunyan has presented the saving potential for the fish producing company “Sevani Ishkhan 2”, with a waste management solution which will save waste fees, and generate 5 500 euros per year, recycling fish waste and getting a new product as a fish food supplement. Previously the company was spending around 6587 Euros annually on waste removal. These solutions are enabling companies to pursue the circular economy path with savings and economic benefits along with environmental solutions.

After intervention stakeholders came up with suggestions and raised topics related to the RECP implementation, namely:
Ministry of Environment, Kristine Sahakyan, has introduced the new guideline of the Ministry on Industrial Waste which is being elaborated and can benefit from the exchange of experience in the waste management sector and RECP applications.

Deputy Minister of Environment Ms. Gabrielyan has supported this idea, suggesting enlarging the discussions and providing relevant recommendations before the finalization of the guideline.

Ms. Astghine Pasoyan, Energy saving foundation, has underscored the fact that the current project has been a large-scale contribution to the promotion of Green economic development and assistance to the SME sector, and the team has conducted lots of work in assisting SMEs to become green. The state would benefit from institutional and regulatory acts supporting the promotion of a circular economy, and this practice will be beneficial for all stakeholders.

T. Chernyavskaya, UNIDO: Has underscored that Governments are pursuing the Green and circular economic passage and assistance measures, and EU4Environment has been availing this opportunity for us. She has mentioned Eco-industrial parks, as a new director of this initiative where Armenia will be invited to participate at the regional level. EU single market for green product initiative is planned to be introduced in the country promoting product environmental footprint (PEF) for export-oriented companies is already planned. In this regard, a national tender was opened by UNIDO to invite interested institutions to support the implementation of this activity in Armenia. The deadline of application is 11 July. Other issues are related to the introduction of RECP Clubs in two regions of Armenia, following the recommendation of the Results Oriented Monitoring Mission conducted by the EU in summer 2021. The SG members are invited to approve this recommendation and suggest the possible regions where such clubs could be established.

Ms. Pasoyan, ESF, has mentioned that the RECP measures which are suggested as large-scale audit recommendations are not adopted because of their costs, not because they are not effective. SMEs cannot pursue the larger costs for recommended RECP measures which are extra to their budgets and there is a need to think of additional funding schemes for SMEs to implement the latter.

Lucia Food director Ms. Lusine Baratyan has mentioned the importance of work performed by the Armenian team of the EU4Environment RECP project and its experts in helping in identifying opportunities for RECP application. She has encouraged similar measures and stressed that there is a need to revise and reform SME assistance schemes considering new, more transparent and open opportunities for SMEs to participate in tenders where the threshold was the price and not the quality of the products. 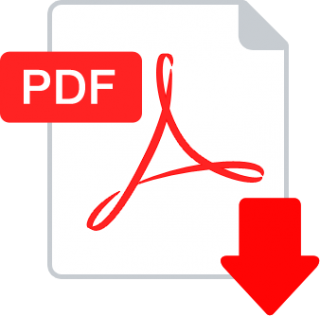 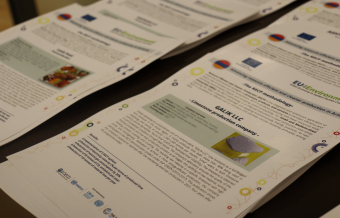 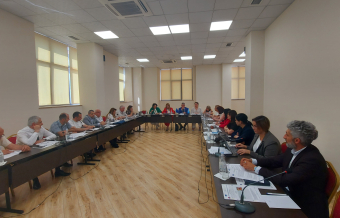 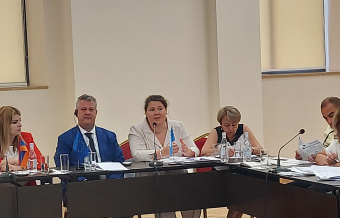 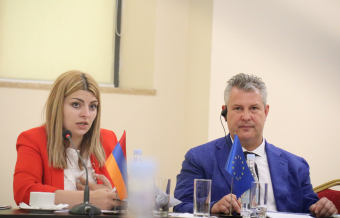 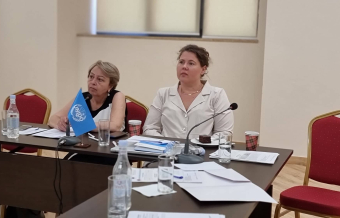 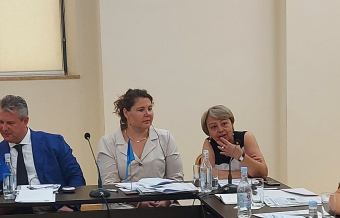 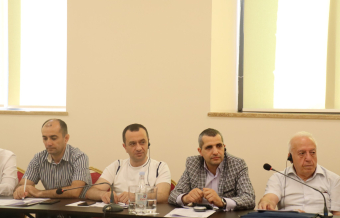 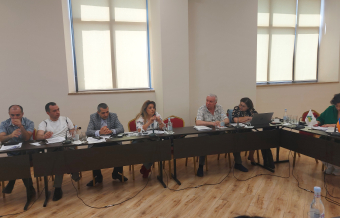 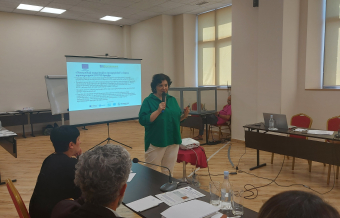 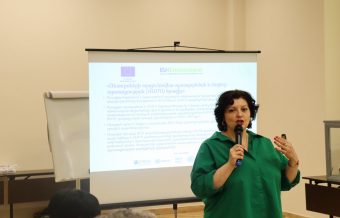 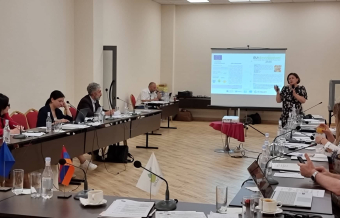 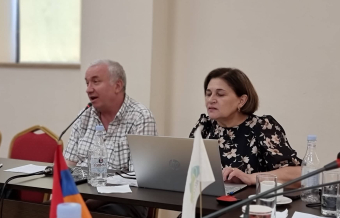 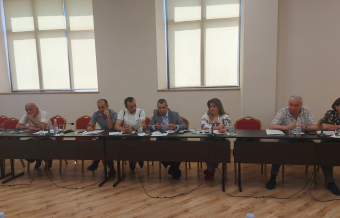